For three days in November of 1964 fourteen of America’s best known Christian peacemakers gathered, by invitation of their host Thomas Merton, at the Abbey of Our Lady of Gethsemani in Kentucky for an informal  retreat to discuss “The Spiritual Roots of Protest.” Gordon Oyer, with an insatiable “curiosity and relentless digging,” has reconstructed for our generation the story and discussions from those three days at a monastery in the damp, chilly, rural Kentucky hills. 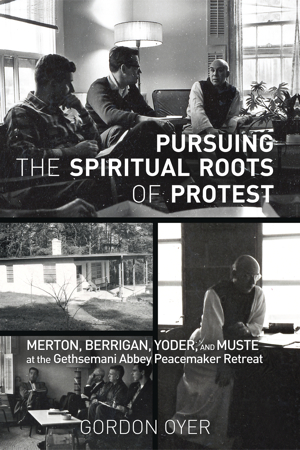 Jim Forest, one of the fourteen participants,  recalls the persistent question during those three days—”By what right do we protest?” He writes, “Merton and others at the retreat made me more aware that acts of protest are not ends in themselves but ultimately must be regarded as efforts to bring about a transformation of heart of one’s adversaries and even one’s self. . . Merton put great stress on protest that had contemplative roots, protest motivated not only by outrage but by compassion for those who, driven by fear or a warped patriotism, experience themselves as objects of protest” (from the Foreword).

It seems these days, especially in America, people are quite willing to “protest.” But as people queue up to buy chicken sandwiches, boycott television networks, and hold signs at freeway overpasses, I wonder how compassionate their motives are.

Pursuing the Spiritual Roots of Protest: Merton, Berrigan, Yoder, and Muste at the Gethsemani Abbey Peacemakers Retreat should be available in the late winter or early spring of this year. (NB: I realize the working cover has the singular Peacemaker. That will be changed to the plural Peacemakers before the books release.)

Something I learned about The Lord’s Prayer