What the Eye Cannot Unsee

Ever since my graduate school days I’ve been interested in models outside of hermeneutics and biblical studies that can inform our understanding of how we—that is readers of biblical texts, generally, and Christians of their sacred texts, more specifically—read, understand, and interpret scripture. So things like Charles Sanders Peirce’s semiotics and pragmatism (though, later in life Peirce insisted on his ideas as “pragmaticism,” so as to distinguish them from the growing popularity of William James’s pragmatic theory), or J. L. Austin‘s speech acts (John R. Searle was influential in bringing speech acts more fully into philosophical discussion, but I tend to side with Stephen Fowl in seeing Searle as the systematizer of Austin’s looser thoughts), or Nancey Murphy’s ideas about supervenience and nonreducibility (and also her work, along with many others, on body and soul) have opened my eyes to the complexities of reading texts and getting at their meaning(s). Even after muddling my way through a dissertation that danced around these hermeneutical questions with two capable dance partners, I don’t feel any closer to being settled than I did 15+ years ago when the questions first rose to the surface for me. Still, I’m on the lookout for theories, models, analogies, examples, etc. that help us think about these things constructively. Earlier this week Alexis C. Madrigal published an article available online at The Atlantic entitled, “Things You Cannot Unsee (and What That Says About Your Brain.” I started to read the article first because the internet meme it references fascinates me. I can’t look at a two-pronged coat hook the same again! 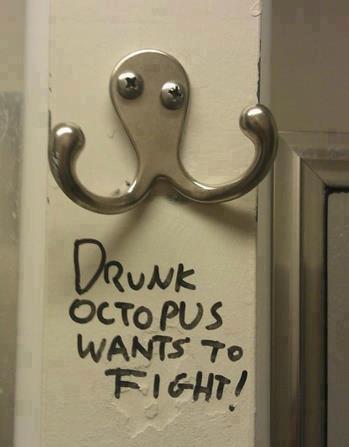 But Madrigal digs a little deeper into the cannot-unsee phenomenon by talking to psychologists, cognitive scientists, philosophers, neuroscientists, and others. I began to think that many of the things Madrigal was discussing could just as well find currency in hermeneutical conversations. Take for example a few snippets from the article and consider them in the context of interpreting texts:

In a trite, but not untrue, way we rewire our brain when we see something we cannot unsee. I would guess that a certain amount of rewiring takes place when we read and understand a text differently for the first time. This makes the work of biblical interpretation all the more important, I think. And, if I may get a little pious, it makes the task of those who proclaim the gospel all the more significant. Indeed, they are not asking us to see a coat hook as a drunken octopus or Australia as the conjoined heads of a cat and dog…

No, the gospel calls us to see the Messiah as a crucified messiah, the Gentile as a part of God’s people, the enemy as one to love, etc. That’s a lot of rewiring! But equally daunting is the rewiring of those who have read and lived with the biblical texts for a long time, those whose “previous input to the system” has so well established certain “internal goals and predictions” that finding the Dalmatian among the spots is next to impossible, metaphorically speaking (as seems appropriate here).

Click the image if you need help spotting the dog. (Pun intended!)

Oregon Summer on My Mind