I’m willing to guess that if you were to browse the bookshelves of most evangelical ministers you would likely find more books on leadership than you would just about any other topic. Of course the fascination with leadership is not peculiar to evangelicals. It just seems to be more pronounced and widespread. So why would the Senior Lecturer in New Testament and Theology at Morling College in Sydney, Australia want to add to this already crowded market? I’ll let David Starling tell you in his own words:

There will always be a place for the occasional book or conference or course focusing on leadership itself—on the qualities and techniques of an effective leader. But the more such books and conferences and courses proliferate, the more they need to be matched by a different sort of leadership-discourse: the sort that deliberately places the theme of leadership off-center and out-of-focus, orienting it toward the ends which it ought to serve and locating it within the relationships in which it ought to belong. 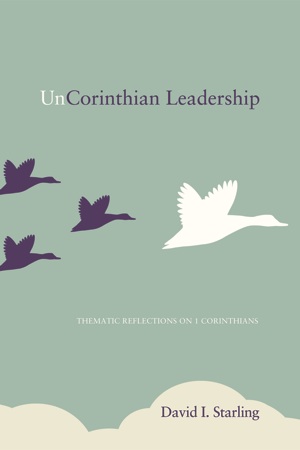 I’m finishing up a proofread of Starling’s excellent little book, UnCorinthian Leadership: Thematic Reflections on 1 Corinthians.
It should be sent to the printers next week. I recommend pastors, evangelical and otherwise, pick it up and read it straight away.

In the introduction Starling takes some time to note how leadership overlaps with, yet is different from authority, office, teaching, and servanthood (all more “biblical” concepts, by the way!). He lands on the following working definition:

leadership is the act or task of making an intentional contribution toward the direction and motivation of a group in the framing and pursuit of a common purpose. The concept of leadership, understood according to this definition, is thus closely related to but distinguishable from the concepts of authority, office, teaching, and servanthood.

And as the title and subtitle suggest, Starling spends most of the book in his wheelhouse, the New Testament, namely Paul’s first letter to the church at Corinth. He writes:

Thus, while 1 Corinthians is not a Pauline leadership manual, it is (one could argue) something even more useful for our current purposes than that. It is an inspired, canonical case study—a worked example of what is involved in the complicated task of disentangling the various components of leadership from the cultural matrix in which they have come to be understood, in order to reorient them toward their proper end.