An Ugly Duck Finds a Home

It’s weird, cause my folks had just been in town and had never mentioned it. But as I was checking stats on my phone after a run a message popped up. It was an email from Dad that read: “My Brief Medical History.” Dad was at the end of a battle with prostate cancer, and he was looking to make a full recovery. So I didn’t think much of it. But in reality I had no idea what I was about to read.

This may seem like on odd segue, but my father was adopted when he was four months old. Just as it was part of the story his parents told him growing up, it was also part of the story he told me as I grew up. I always knew that my cousins and aunt and second cousins on my Dad’s side of the family were not “blood” related. That didn’t make them any less my family, but I sure didn’t look much like them.

As you can imagine, on more than one occasion growing up I had asked Dad if he was curious about his birth family. He always replied with a smile and a clam assertion that he really didn’t want to know. He truly loved his Mom and Dad and didn’t see any need to find any other parents. But at the age of 66, now that his mom and dad had passed away, my dad finally decided to check into his birth history. He did it, as the subject line indicated, to find out about his medical history. It’s funny what can happen when you open doors that have been long shut.

I opened Dad’s email and found a letter that had been written in 1948 by a ward at a maternity home in Tacoma, Washington. The purpose of the letter was to make arrangements with the State of Washington Adoptive Services to take on a soon to be born little boy: my dad. The letter told the story of two teenagers who, though deeply in love, had gotten a bit ahead of themselves. Being that this was 1948 and the cultural mores were what they were, “Eva” was sent by her folks to have her baby in secret. She was nineteen. “Jerry” was still in high school, and they realized they were not in a place to get married. So they decided—with some input from their parents—to give their baby up for adoption. According to the letter, though Eva’s parents had hoped she would continue on in college and pursue a career, Eva’s intention was to marry Jerry and start a large family. Jerry, the letter also noted, planned to graduate high school and start a career as a printer.

The letter also included three descriptions of their baby—who they called “Baby Jerry”—as a newborn. He was very thin and quite strong. He had a sunken chin. He had bright eyes and was very attentive.

As I read the letter I was overwhelmed with a sense of sadness and a sense of awe and gratitude. This description of my father was almost exactly how I would describe my own son, Max, when he was born. If Eva and Jerry had kept their baby, neither Max nor I would be here. But what a horrible loss! I can’t even imagine the pain of having a child and needing to give him away to strangers (and as was the custom in 1948, strangers you would have never met or know anything about). That night I would go on to share the news of this letter with my church at our gathered worship, and noted how amazing it is that God brings such goodness out of such pain and brokenness.

I sat in stunned silence on my porch and read this letter over and over. And then I called my dad and we talked. He wasn’t too sure he wanted to explore it further; after all, he had just been after some medical information.

Well that lasted for about a day. My sister called me the next day to tell me that she’d found Eva and Jerry on Facebook. From that point we were on the hunt. We were able to piece together that they had at least four kids and a lot of grandchildren and great grandchildren. Most of them lived in the Seattle area. And wow, this guy looks exactly like Dad! And, holy smokes, this guy looks a lot like me! Through a little more digging we found out that not only did Jerry and Eva marry and have a big family, but that Jerry actually had along career as a printer at the University of Washington, where my dad had gone to college!

Needless to say, we got very excited. My sister and I started encouraging Dad to send Jerry and Eva a letter, and though at first he was a little apprehensive, he agreed. I told him that these folks loved each other, and you were their little baby. Of course they want to hear from you! But the truth was, I wasn’t so sure that was the case. I mean, we honestly didn’t know what to expect: was this a deep dark secret that they would rather just keep in the past? Had they ever tried to look him up themselves? Did any of their family even know he existed? But we had made a plan, and together we worked on draft of a letter over the course of that Thursday. Then, with both excitement and trepidation, Dad mailed the letter with a clutch of photos of himself from infancy to his present age, all sent overnight to Seattle via certified mail (this allowed him to get tracking updates).

Dad said he was pretty nervous that he was dropping a big bomb on these poor people.

Saturday morning I received the emails from Dad with the tracking updates: the package has left the post office and is with the driver. The driver is scheduled to deliver by noon today. And then . . . nothing. Noon came and went. Then at 12:51 I received a forwarded email from Dad:

“Wayne, thank you for this important bit of info. We have been praying regularly for you for years are so pleased to know (and relieved) that you are a Christian first and foremost. . . . We appreciate you keeping this under wraps until we can inform our other kids which will occur in the not-too-distant future. Praise the Lord for His bountiful blessings. More later. With our love to you and all your family. Eva and Jerry.”

From there a flurry of emails were exchanged between Dad and Jerry. Then they talked on the phone. Jerry made it very clear that he wanted Dad and our family to be part of theirs lives, should we want that too. But, they also needed to plan a meeting with their other kids to let them know they had an older brother. “They’re going to find out that we aren’t a pious as they thought,” Jerry said.

On October 26 (our son’s birthday) Jerry and Eva had their three other sons over to their house and had their daughter in the meeting via Skype. As you can imagine, it was quite a shock when they learned they had an older brother they had never known of before, but that night our family got to meet theirs on Skype. It was amazing, and I had to eventually pull Dad away from the computer so we could have dinner.

Soon after we all began to make connections with our new family members on Facebook. Then a big (re)union was planned. We all drove up to Seattle on the weekend of November 9th and spent three very full days meeting and getting to know our new family. It was exhausting and exhilarating. We had close to 40 people packed into my “Uncle Steve and Aunt Kathy’s” house over those days. We told stories and laughed. We ate food and laughed some more. I found out that my cousin Livy’s knees bend backward like mine, and that Jesse has the same weird cowlick on the back of his head. Max ran around without his shirt  like a wild man and had the time of his life. It was like meeting the family you’ve always known and loved. It felt like being home.

And Grandpa Jerry and Grandma Eva both took turns hugging me, staring into my eyes, and telling me that they loved me.

As we made our journey home I told my wife (Katie) that I felt so worn out, but so full. It was like finally finding out that you are really a swan and not a duck. Not to take away from the family I’ve known my whole life and whom I love deeply, but there is something amazing about finding relatives who look like you and who share some of the same weird quirks. After feeling like an oddball most of my life, I finally realized I’m pretty cool after all: I’m like my people. 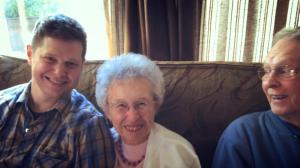 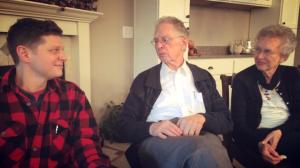 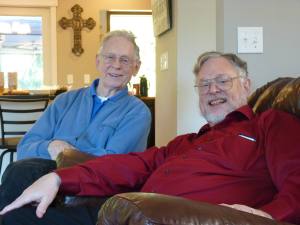 Dad and His (Bio) Dad 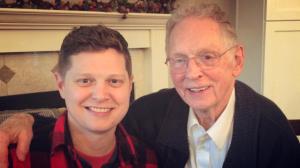 Me and Grandpa… similarity? Methinks so. 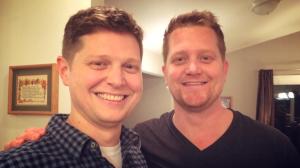 Me and Jesse… the back of our heads look even more alike. 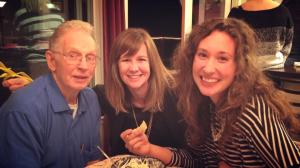 Welcome to the World Lewis Amondson!