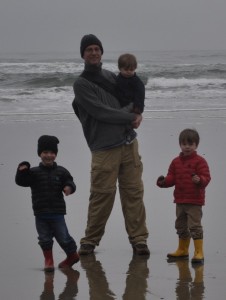 I joined Wipf and Stock in June of 2007, having completed my PhD at Fuller Theological Seminary the prior year. When I arrived in Eugene, my wife was pregnant with twins. In December of that year, she gave birth to two boys—Alexander and Oliver. A little over two years later we found out Gail was pregnant again. In October of 2010 Isaac joined our family. I have three small boys. I have little time for much else.

When I do have time, I like to run and read. Not at the same time (usually). Having grown up in Texas and lived in Southern California for several years, I’ve had to adjust to the Northwest. I am happy to say that the adjustment is almost complete. I digress some during the wet and grey months, but on the whole, I’ve fallen in love with the area. We are slowly becoming outdoors people—hiking more often than at any time in my life, growing our first garden, going camping at an actual campground for the first time ever, and generally trying to get outside as much as we can.

My posts on Running Heads