All runners—no matter how fast or slow!—in Atlanta next month for the annual AAR/SBL conference, you are invited to join me and others on a casual run along the Freedom Park Path Trail on Saturday morning at 7am. Here are the details:

When: Saturday, November 21st, 7am

Where: Meet in the lobby of the Hyatt Regency Atlanta (265 Peachtree St NE.).

What: Run on some streets until we connect to the path. Follow path to Jimmy Carter Presidential Library and Museum. Turn around and head back to hotel. About 5 miles. You can turn around sooner or continue past the planned turnaround spot, if 5 miles is not your preferred distance.

Who: You, me, and anyone else who wants to run before the conference frenzy hits us. Contact me if you need more info: chris[at]wipfandstock[dot]com.

View route map for Freedom Trail From Hotel on plotaroute.com

Over eight years ago I arrived in Eugene with my pregnant wife and a new job. Up to that point in my life I had never been much of a runner. In fact, I actively resisted it, much to my wife’s chagrin (she has had running as a part of her active lifestyle ever since I’ve known her). But my managing editor, and therefore kinda my boss, asked if I’d like to go running with him at trail not far from our new house. He even had some hand-me-down running gear that he gave me. So I started to run every once in a while, again much to my wife’s chagrin (being pregnant she was not able to run much, right at the time I started to take it up!). Something took hold. It was the company for sure, but also the culture of running that is woven into the fabric of Eugene.

Eventually I started to run during my lunch hour at work with my colleague and office-mate Charlie Collier. Charlie had run several races in the past but was looking to pick it back up after some time away. Running with Charlie got to be a pretty regular thing. Two to five times per week we would go out from the gym near our office and make our way to the river path or Pre’s Trail. The first time he and I went on a run together, we followed a route of about 3.75 miles that crossed the river twice. At the second bridge, with about a mile to go, we both were out of gas. We walked across the bridge and then picked up the running from there. We got to a point in our running where stopping was not necessary. Later we were able to push a little further and run a route that stretched to just over 5 miles. After several months (maybe even a year or so), we made it a goal to run that route in less than 40 minutes. It took a while, but we did it. Charlie, having run more than I and knowing the personal milestones for races, suggested we try to run a 5K in less than 20 minutes. And so we started training for my first race. On Valentine’s weekend 2011, Charlie blew by me in the last stretch of the race. (This has become a constant theme of mine. I don’t manage race paces well.) Neither of us broke the 20-minute barrier, but we were only seconds off. From that point on, I’ve been hooked on reaching certain goals. Just last month I finally went below 20 minutes in a 5K! It’s the only goal I’ve reached. I’m still working on under 90 minutes for a half marathon (I need to trim three minutes) and hitting the qualifying standard for my age group for the Boston Marathon. My one and only attempt at a marathon was not fun and I’ve had nagging pains ever since. But now that Charlie has done it, I might have to give it another try some time.

All this to say, I see myself as a runner now. And like Forrest Gump, running with company is not a bad thing. (I miss running with Charlie, by the way, now that he’s moved to Portland.) I know there are several folks who attend AAR/SBL every year who also enjoy running. Last year I organized a run for conference goers. A small handful showed up on Saturday morning to run along the San Diego harbor. It was beautiful! This year in Atlanta I am putting together another Saturday morning run. It will be a casual run along the Freedom Park Path Trail section of the larger Stone Mountain Trail. All speeds and abilities are welcome. I’ve mapped out about 5 miles, but the path can be shortened or extended as runners wish. In another blog post to follow shortly, I will provide all of the details. If you are a runner and attending AAR/SBL, set aside Saturday morning at 7am to join us!

This post has three parts. The first is about the music offerings of 2015 so far. The second is about the start of the 20th season of MLS. And the third is about a running app. In other words, if you came here looking for a book announcement, or a theological reflection, or commentary on a current event, you’ll be disappointed. However, if you’d like to get some new music recommendation, or you are a fan of soccer in America, or if you’re a runner and want the lowdown on a helpful app, then you’ve come to the right place. Links abound!

So far I’ve been underwhelmed by the music coming out in this two-month-old year. Nothing has stood out. To be fair, I listen almost exclusively to Spotify, so I’m not able to hear everything. For instance, I’ve yet to hear the new Bjork album. From what’s available to me, and from what I’ve taken the time to listen to, I’ve not yet been wowed. I had high hopes with the new releases of some old favorites: Father John Misty, Iron and Wine, Jose Gonzalez, Joshua Radin, The Lone Bellow, Of Montreal, Dan Deacon, Belle & Sebastian, and the Punch Brothers, to name a few. They’ve not disappointed me, necessarily, but none of them have hit me quite like they did the first time I heard them however many years ago. I’ve come across some artists new to me that might grow on me as the year goes on: The Amazing, Champs, Fryars, Ibeyi, Sea Change, Jape, and Rhiannon Giddens come most readily to mind. And I’ve hope some of the singles being put out in anticipation of later albums will lead to a better music year: see especially Alabama Shakes, Florence + The Machine, and Passion Pit.

The MLS owners and players worked out a new CBA yesterday, so the 2015 will not be derailed by a work stoppage. This means the 20th season begins tomorrow night. My boys and I have created our fantasy teams, we’ve got tickets for a Timbers game in April, and the league has a new television deal that will allow us to see a few more games.  The recent influx of USMNT players to the league makes it all the more exciting.

I’ve been running fairly regularly for the last 5 years or more. In that time I’ve used two different sport watches and numerous running apps on my iPhone. I’m as addicted to the data as I am the running! The problem is that my data has gotten scattered across several platforms. I like certain things about one platform and certain other things in other platforms. I have running data on Garmin Connect, RunKeeper, Runtastic, and Runcoach. I’ve been able to consolidate much of that data to some extent. There are still several missing activities on some platforms and still many other duplicates, but I’ve got a good history on several sites. I still can’t decide which one I like the most, so I’ve decided to keep adding activities to all of them and more. Recording runs on several platforms means having several apps open at once while I run, or it means having to manually enter my runs on a half dozen sites after I’ve completed my run. I was going the manual entry route for a while. It got old quick. Then I found a running app that recorded my runs and also allowed me to upload the run to several other running apps: Wahoo Fitness. It is the most versatile running app I’ve ever used. After each run I upload my run to my accounts on Garmin Connect (which automatically connects to Runcoach), Runkeeper, Strava, Nike+, and MapMyRun. I can also put the GPX or TCX file into a folder on Dropbox for uploading to Runtastic. There are other fitness sites Wahoo can upload to, but I’m trying to discipline(?) myself and stick to these seven. While I can’t seem to make up my mind about one platform for recording my running data, I am quite satisfied with the Wahoo app for giving me the option of not having to decide. In addition to compatibility with other sites, Wahoo is capable of linking up with various devices like heart rate monitors, cadence sensors, bluetooth scales, bike computers, and a host of other gadgets for purchase. I’ve yet to buy any of those compatible gizmos. The thing I like best about Wahoo is its simplest feature: the screen! The workout screen has big, easily readable numbers. Reading your distance or pace or time on an iPhone strapped to your forearm, your head bobbing up and down, and sweat getting into your eyes that don’t have glasses on them or contacts in them is not easy. Wahoo’s designers seem to understand this. Highly recommended for runners who are as indecisive and visually impaired as I am.

Calling all runners attending AAR/SBL 2014 in San Diego. You are invited to meet at the San Diego Convention Center’s famous stairs on Saturday, November 22 at 7am for a group run along the San Diego harbor. 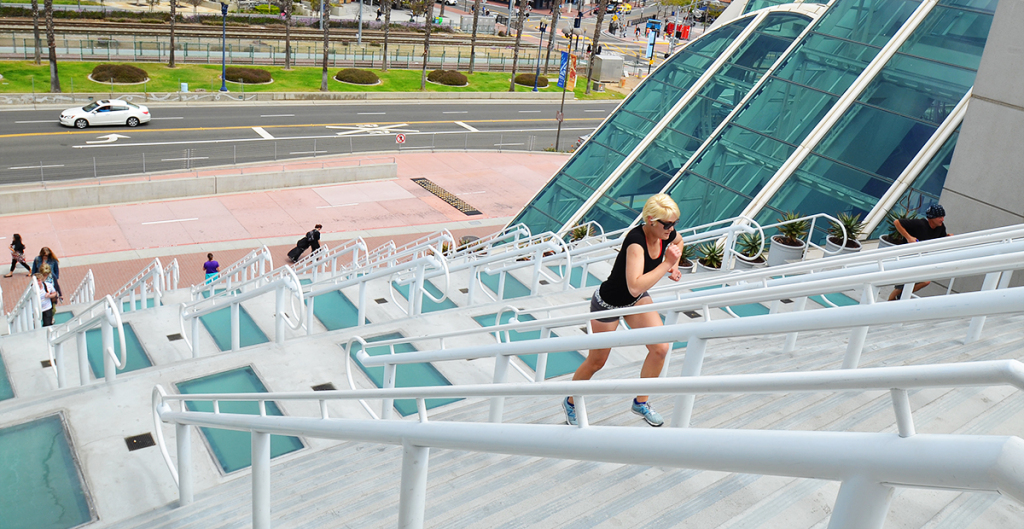 Come early and warm up with a few trips up and down the steps.

The invitation is open to runners of all levels and speeds. The more the merrier. Post-run coffee is on me! Get in touch if you have any questions: chris[at]wipfandstock[dot]com.